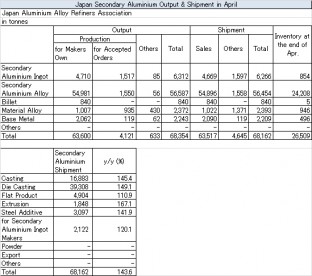 Japanese secondary aluminium and aluminium alloy production totaled 67,721 tonnes in April, increasing by 41.2% from a year earlier, while the shipment was 68,162 tonnes, increasing by 43.6%, according to Japan Aluminium Alloy Refiners Association. Both of the production and the shipment represented year-to-year plus for 2 months in a row. The figures showed much year-to-year expansion in April since the volumes halved in April 2011 after the mega earthquake. Compared with April 2010, the production was 93.3% and the shipment was 94.3%.