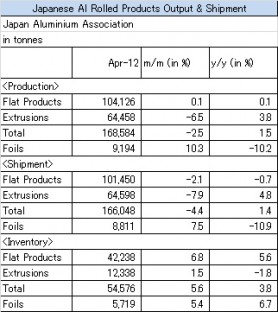 Japanese aluminium re-rollers’ output of flat and extruded products increased by 1.5% to 168,584 tonnes in April from a year earlier, which represented year-to-year plus for 2 months in a row, announced by Japan Aluminium Association on May 25. The shipment increased by 1.4% to 166,048 tonnes, year-to-year plus for 3 months in a row. The demand was steady from cur industry, supported by Japanese government’s incentive program for environment friendly cars.