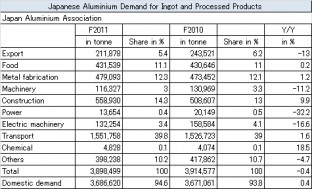 Japanese total demand of aluminium ingot and processed products decreased by 0.4% to 3.898 million tonnes including export in fiscal 2011 ended March 2012 from fiscal 2010, announced by Japan Aluminium Association on Friday. The demand decreased for the first time in 2 years due to slower demand at home and abroad. Some of the applications showed sign for recovery.