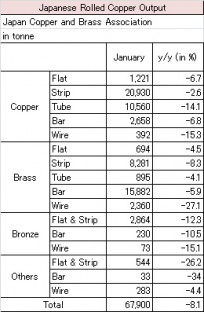 Japanese rolled copper production decreased by 2.6% to 20,930 tonnes for copper strip in April from a year earlier, announced by Japan Copper and Brass Association on Friday. The output hit 20,000 tonnes for the first time since July 2011 when the demand hit bottom for lead frame of semiconductor and higher export.