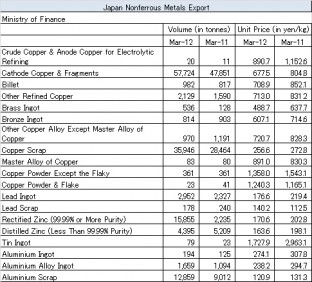 Japanese cathode copper export increased by 21% to 57,724 tonnes in March from a year earlier, according to the trade statics by Ministry of Finance. The export to China decreased by 5% to 23,202 tonnes while the export increased to Southeast Asian countries such as Malaysia, Indonesia, and South Korea.