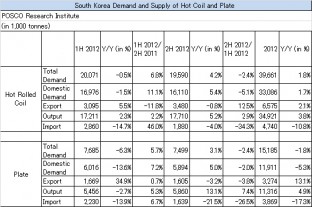 POSCO Research Institute expects South Korean apparent consumption of hot rolled coil will increase by 1.7% to 33.09 million tonnes for 2012 from 2011, which hits the record for 3 years in a row. The output increase is more than the demand growth. The export is higher than import for 2 years in a row. The plate demand decreases by 5.3% to 11.91 million tonnes, which decreases for the first time in 3 years. The higher output causes higher export. The import is marginally higher than the export but the net import is a third of the figure in 2011