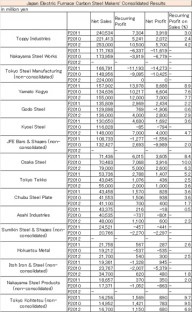 Many Japanese major electric furnace carbon steel makers increased margin in fiscal 2011 ended March 2012 from fiscal 2010, according to 16 makers’ results. The market was slow in first half of fiscal 2011 due to the impact of major earthquake but the demand of concrete reinforcing steel bar recovered in the second half. The makers gained higher margin due to higher price of some items in the second half while the scrap price decreased.