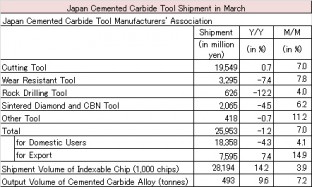 Japanese cemented carbide tool makers’ domestic shipment increased by 2.5% to yearly 290.67 billion yen in fiscal 2011 ended in March 2012 compared with the previous fiscal year, announced by Japan Cemented Carbide Tool Manufacturers’ Association on Thursday. The shipment increased in year-to-year basis but represented lower than the forecast of 302 billion yen announced by the association in November 2011. The shipment became slower than estimated in the second half year. Only the shipment volume of indexable chip hit the record high for 2 years in a row and exceeded yearly 300 million chips for the first time. 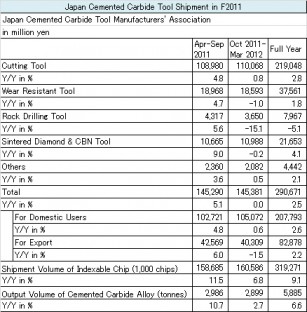 Cemented carbide tools are mainly used for parts cutting in car and IT industries. In the first half of fiscal 2011, the shipment didn’t decrease despite of the temporary output suspension of automakers after the Japan Earthquake. The shipment was supported by the favorable demand at offshore market, especially in emerging countries. In the second half year, the shipment slowed down mainly for cutting tools along with the global economic downturn. The monthly shipment in March reached 25 billion yen for the first time since September 2011 though which represented slight year-to-year decrease for 5 straight months. The shipment value of cutting tools recovered more than 19 billion yen and shipment volume of indexable chip reached 28 million chips for the first time since September. Export value of all tools reached 7 billion yen for the first time since October.